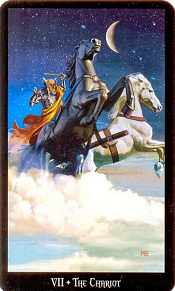 I. Keywords and corresponding associations to the Chariot Witches Tarot

An armored charioteer stands in a gold and silver chariot as he drives his horse through the clouds of the sky. In the background, we see a crescent moon, a starry sky, and a brighter sky with the sun below. On the charioteer’s hat is an eight-pointed star. This is Venus, the symbol of healing. Crossing the armor is a golden shawl carrying the symbols of the Zodiac. He raises the wand in his left hand, and with his right hand, he controls the two horses pulling the chariot with his willpower, for there are no reins on the horses. This shows that he controls his own powers and occult energies with ease.

The Chariot Witches Tarot tells the story of the Hero, who fought fiercely and won. This is the only card in the deck with two horses in it, and their symbolism is very significant. This pair of horses simulates the columns in the High Priestess card. To the right of the charioteer, there is the black horse, representing darkness, moon magic, chaos, subconscious, and feminine energies.

The white horse to the left of the charioteer represents daytime, the magic of the sun, order, consciousness, and masculine energies. Instead of being controlled by these forces, the charioteer directs and controls them to produce the results he desires – as we see, he restrains the horses and lets them advance together.

This is a card that talks about hard-won victories. The Chariot Witches Tarot is all about confidence, control, drive, and determination to succeed. Tap into your own personal power and you will see your goals come to fruition. Obstacles and difficulties will be removed. Perform miracles for action and change. When the Chariot appears in a Tarot spread, it is a message to combine your miracles with discipline and perseverance. Power comes from within. Believe in yourself – combine determination, focus, and will – and you will succeed.

The Chariot Witches Tarot carries the image of Julius Caesar on a glorious chariot into Rome. He defeated the enemy and obtained many trophies and lands. This is the soul of The Chariot. This 7th card represents glory gained through strong desire and high individuality. The image of the army is completely fitting for The Chariot because this card is associated with the power of conquest – discipline, Will of steel, and decisiveness.

The Chariot symbolizes the positive side of the ego, being powerful and believing in yourself. Know what you want and how to get it. Maybe we don’t like people with big egos. But certainly, when we need to solve problems, we will look for them to help us overcome difficulties because we know they have a lot of assertiveness.

The Chariot Witches Tarot often appears when the entity is difficult to control and easily recognizable. In the best case, the ego is not harshness, but firmness and clarity, behind which is a strong desire and impeccable confidence. The Chariot can be self-control or control of the surroundings. This card also represents triumph. There are many types of victory, The Chariot is the “to sink or to swim” type. Success comes from beating others and being the leader. Those moments are the true glory in the right circumstances.

IV. The Chariot Witches in a Tarot spread

As the 7th card in the Major Arcana, The Chariot Witches Tarot depicts your ability to be goal-oriented, confident, and to overcome obstacles in your life. In the traditional Tarot deck, the card depicts a man riding a chariot pulled by 2 animals of opposite colors without reins. This card represents the confidence of the querent. Two animals of opposite colors represent two extremes: no matter what is pulling you, either good or bad, the outcome will be positive.

The Chariot gives off a lot of energy, but it is not an “available for everyone” type of energy. It is direct, in control, and purposeful. When this card appears, you may be very clear about your wishes and dreams and you know how to achieve them. The card is about determination and ambition, getting things done, testing, and proving what you have. This is a sign that you should move forward with whatever you have in mind and heart, and do your best. However, remember that you need to use both bravery and heart to be truly successful.

When combined with the High Priestess, the idea here is that intelligence is the most powerful tool to assist you on your way to victory. The Star, when combined with The Chariot, emphasizes and adorns the upcoming “victory”. If the 3 cards The Chariot, The High Priestess, and The Star appear at the same time in a spread, there is no doubt that you are undefeated and all must kneel. When The Chariot pairs with the King of Pentacles, this is an indication that you are about to inherit property from someone. If you are single, The Chariot combined with the King of Cups means that love is really close to you. This is also often a good sign of marriage.

In terms of work, it is important not to let the little things overwhelm your mind. There may be people who oppose you (intentionally or unintentionally). Don’t let those bother you. Do your best, and don’t waste time worrying about what other people think or comment on your efforts. If you are right (and most likely you are), then they will recognize you. You may be feeling the heat inside and ready to move on.

In terms of love, you may be prompted to go far and fast and/or someone is pushing you to do so. Anyway, be as frank as possible about your limits and desires, and be honest with yourself about the possibilities. If someone makes an offer that you don’t want, simply let them know you are not interested.

In terms of finances, everything seems to be fine. Maybe you are considering shopping for transportation – like buying a car, buying a plane ticket to get to a place you have wanted to go for a long time. Prioritize paying off debts, if any. You can do it now if you maintain a disciplined lifestyle.

In terms of health, your vitality is very abundant and you are ready to rush away at any time. This is the perfect time to start or strengthen a fitness plan. You are actually capable of doing much better than you expect.

In terms of spirituality, you will probably go somewhere (nearly) to help increase your awareness of the Spirit world, and you are in a state where you can learn very quickly on the subject of Spirit. Attend seminars, talk about spiritual issues that are unfamiliar to you and beyond the scope of your study before. You will get more in return than you ever expected if you try these new things, which can be a time to ruminate.

Even in the reversed position, The Chariot Witches Tarot is still a card of change. This transformation can be literal, from place to place, or more abstract, a change in you or someone you hold dear in mind or heart. It also suggests that you take the time to figure out what is causing you to feel that way, as well as take the time to reverse the situation.

The reversed Chariot symbolizes that you should carefully consider where you are going and why. Don’t go just because you want to go. At this point, the right purpose and direction are very important.