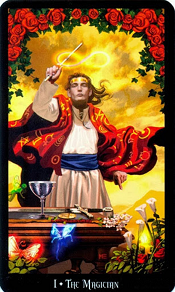 I. Keywords and corresponding associations to the Magician Witches Tarot

The Magician Witches Tarot stands behind an altar at dawn, with a pentagram around his neck and occult symbols embroidered on his robes. Holding a wand in his hand, he draws a curve number 8, symbolizing infinity, onto the space in front of us, reminding us that “inside and out” while his other hand pointing to the ground to describe another classic occult idiom “As above, so below.”

The Magician Witches Tarot is the controller of the four natural elements. By combining his own abilities with the elements of nature, he casts spells with the absolute power of his will. He stands under the arch of red roses, signifying harmony. The four lilies in the foreground symbolize his pure relationship with the divine and his creation. The four fairies in the card represent the four natural elements: the green fairy is Earth, the red one is Fire, the blue one is Water, and the yellow one is Air. The fairies flapping their wings around the altar show us how he intimately connected and had a powerful partnership with the elements and wondrous resources of the natural world.

When the Magician Witches Tarot card appears in a spread, it is a message to harness your own magic to find the answers you are looking for. Balance the elements and natural powers to create miracles and bring about positive change. Miracles are all around you, and it is everywhere in the natural world. The Magician challenges you to find it. Connect with the energy of this element and harness its power. Be confident and look inside as well as outside.

This particular Major card is a lesson in the occult Rule of Correspondence, which teaches us that “As above, so below; inside and out.” We exist in all bodies – celestial bodies/spirits, energy bodies, and beings. The Magician Witches Tarot urges you to choose the most natural and harmonious accessory tool that allows your miracles. Use the corresponding laws and all the resources at your disposal wisely.

The Magician Witches Tarot is the archetype of the active, masculine principle – the ultimate goal taker. He symbolizes the power to embrace the forces of the universe and use them for creative purposes. Notice his posture in the drawing. He acts like a lightning rod – one hand stretched upwards to the Divine for inspiration, the other pointing down to Earth to impart this mighty power. Sometimes his abilities even generate miracles because his willpower will help him achieve seemingly miraculous things.

What makes The Magician so powerful? First, he is not afraid to act. He believes in himself and is willing to take risks with that belief. He also knows well what he intends to do and why. He doesn’t hesitate because he understands exactly his situation. The Magician can focus on a single determination. Just remember the divine source of his power, he has always been the perfect conduit for miracles. In a Tarot spread, The Magician implies that the primordial forces of creativity are yours if you can tap into your power and act with awareness and focus. This card is a sign to take action now, giving you an understanding of exactly what you want and a commitment that you will achieve it.

The Magician Witches Tarot will make a higher – and better – use of all one’s powers: Mental, emotional, and other powers. This is another card that often signifies new beginnings and big plans – a strong and positive omen in readings. This card reminds us that we have the power to make a change, in life as well as in the big world, if we simply try to move on. You may notice that many synchronicities point directly to profound Spiritual events occurring despite the “significant” degree of their superficial appearance. You should find out if you have the knowledge, strength, and inspiration needed to overcome your challenges. Overall, this is a pretty favorable time for you.

IV. The Magician Witches in a Tarot spread

The Magician is numbered 1 in the Major Arcana and is associated with Mercury. It is a symbol of the connection between the earth and the sky, uniting the energy of the universe and the earth. This card is closely related to all 4 suits in the Tarot and is a symbol that represents the rational use of thoughts, emotions, body, and soul. The appearance of this card in your Tarot spread indicates that you have the energy and creativity to begin a new phase in your life. You are reaching your full potential, and your accomplishments seem like miracles.

When The Magician Witches Tarot and The Sun pair together, it indicates great energy to be used to achieve great goals. The Fool complements The Magician in a positive way. Your talent helps you move fast on your plan and your associates are building great confidence in both you and your ideas. The combination of The Magician and the Three of Wands is very charming! All your ventures will be hugely successful.

In terms of work, there is an improvement in your work/career. The Magician Witches Tarot indicates an excellent time to find a new job or ask and get a promotion in your current job if possible. Especially if your work is in the creative field, this is when your suggestions and works will be greatly appreciated and can lead you to “bigger and much better” things.

In terms of love, if you are looking for a new relationship, this is when you kind of meet someone new. If you are already in a long-term relationship, it will advance to a new, deeper level of commitment and enjoyment. This is the perfect time to meet and make new friends.

In terms of finance, your financial source may be on the rise when the Magician Witches Tarot appears – even if it doesn’t seem possible in reality during and at the time of reading cards. Something will appear that allows you to make more money, whether it’s an idea, an opportunity to do some “off-the-shelf” work, or even a new position. Have faith in yourself and your ability to succeed.

In terms of health, if you are feeling sick, it will be over soon. This card represents the return of power or energy. If you are in traditional treatment and don’t get any better, you will probably make great progress if you practice some alternative therapies (nutrition counseling, massage, dieting, etc.).

In terms of spirituality, this is the perfect time for you to do some kind of Spiritual research you have previously thought about but didn’t have the chance to pursue. You will also benefit from spiritual discussion groups. A spiritual teacher may appear in your life right now. This person will be an excellent teacher and will help you view life from a different perspective.

When in the reversed position, The Magician Witches Tarot can indicate that the querent may be hesitant about making the necessary changes to use his/her power more spiritually and effectively. See what you are afraid of. Is it that other people wouldn’t like you to be a new and fresh person? However, there is no reason not to be the person you really want to be – and certainly are.

You may have overlooked the synchronicity that points you in the direction you most want and need to go. Again, you can be unnecessarily self-doubting and end up causing problems for yourself and those around you.