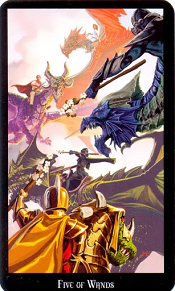 I. Keywords and corresponding associations to the Five of Wands Witches Tarot

II. Meaning of the Five of Wands Witches Tarot

Five majestic and magnificent dragons are rushing into the war on the clouds. Each dragon rider holds a hawthorn wand. The purple dragon represents the spirit. The blue dragon is the water element. The green dragon is the earth element. The yellow dragon is the air element. Lastly, the red dragon is the fire element. The completely different looks of the dragon riders give clues to the true meaning of this card. A few of the knights wear armor and look fierce in a combat stance while the other two seem to hover more leisurely as if to see what the disturbance is.

This is a personal conflict and encounter. Dragons are known to be fierce and ferocious yet wise and mysterious. In addition to the association with the fire element, the five dragons are also connected with four other natural elements including the fifth element which is spirit.

III. Message of the Five of Wands Witches Tarot

When the Five of Wands Witches Tarot appears in a spread, it shows minor annoyances and petty arguments that need to be resolved. There are many different opinions that would like to be heard. This card symbolizes quarrels between guild members, friends, or colleagues. It tells you the challenges ahead. You need to be very clear when sharing your goals and wishes with others. There are many small problems in your work or there will be a little healthy competition. Show determination and put some effort into solving the problem, you will see positive results.

The Five of Wands Witches Tarot represents a time when circumstances seem to be working against you. Imagine you wake up and walk into the bathroom, turn on the shower and realize that you run out of soap. During breakfast, you accidentally smear bread sauce on your shirt. When you pick up the phone to call someone, it runs out of battery. This is probably a terrible day for you. You run into annoying things all the time. Things like that make you want to get angry just because they are so trivial.

Nothing in your life is going smoothly. People work with conflicting goals. The figures in the card are at war with each other. No collaborative effort or consensus appears here. When the Five of Wands Witches Tarot appears in a spread, the message to you is to prepare for an upcoming challenging journey. You will need more patience to get everything done. The Five of Wands does not mean great obstacles, but just many small difficulties and annoyances.

This card also represents competition. In the right circumstances, competition is necessary. It pushes people to work harder, creates a sense of excitement, and encourages the best. When you draw the Five of Wands Witches Tarot, review the competitive factors around you. You may be entering a contest or game soon. Also, you may be about to discover that you have opponents challenging your position. You may even feel discouraged (or energized) by the fiercely competitive environment in which you are an insider. The core of competition is disagreement. Make sure the competition is helping you and others around you achieve your real goals. If not, consider working together to move forward.

IV. The Five of Wands Witches in a Tarot spread

In the Five of Wands Witches Tarot, there are five knights fighting with each other with their wands at hand. This is the meaning of the Five of Wands which is competition. It challenges you to go to the arena and fight. You have the same chance of winning as your opponent, but you cannot succeed if you don’t want to go to the battle. This card often appears to those who are running for election or are interested in another purpose that also has their options open. Whatever the situation, the Five of Wands is a sign that you can be the ultimate winner as long as you put in enough effort.

The Five of Wands Witches Tarot usually indicates competition about work/career, but sometimes it can also mean competition in love. Don’t be afraid to fight because there are values ​​of your own that you can use against your opponents. Also, you have a reason to succeed in this “war”. Above all, you need to put in the effort to see results. When this card appears, you need to believe in yourself stronger than you ever did. Keep your head high and have faith that you will get what is yours. You may be contemplating a career change. Know that you can absolutely succeed.

When the Temperance card appears with the Five of Wands Witches Tarot, it means that you can avoid conflict by compromising. Sit down at the diplomatic table, turn on deep concern mode, and make a deal with the parties involved. When the Five of Wands appears with the Hanged Man, it indicates that you have another option that you have not considered that has the potential to end the conflict. Take a step back and look at the situation from a different perspective. Besides, an unbiased opinion from a trusted third party is a must at this point.

In terms of work, be aware that you are facing competition. However, if you get lucky, you might succeed. The only way to be certain of failure is not to try. Compete fairly even if everyone around you does not do the same. The bad player is likely to prevail in the short term, but as Gandhi said, that kind of victory will never last.

In terms of love, the person you are keeping an eye on may be chased after by other people. Even so, try your best. You need to know that you have done all you can for this relationship. This card also has another meaning that there is someone or some people who are having a crush on you.

In terms of finances, although you may feel that your resources are tight, try to analyze your financial situation calmly. You may not be able to meet all of your obligations right now, but that does not mean you will never be able to meet them. Do what you can and always be honest with the situation. Things will get better soon financially, most likely in just a few weeks.

In terms of health, you may feel frustrated in your search for answers about your well-being. If you are stuck, remember that rushing might not be the best response right now. Sometimes the best solution is to get through the difficulties. At least give yourself a break for a few hours. You still have other hours to spend on worries. In fact, it is more than likely that you are overworked leading your health to be negatively affected.

In terms of spirituality, it is not easy to grow mentally if you are lacking in direction. Take the time to rest and do nothing at this time. Create a space for yourself to calm down and listen to the sounds of your surroundings. Life is not always about fighting and struggling. Everyone needs their own space sometimes to be themselves. Give yourself the gift of time and space, from there you will see and feel spiritual growth.

The reversed Five of Wands Witches Tarot can imply a conflict or competition between many people, usually in the area of ​​work/career. Know that you do not have to — and should not — face these struggles alone as there are great mentors by your side when things get tough. Take things one at a time and think carefully before acting or saying anything. Like the upright meaning of the Five of Wands, you need to really believe in yourself. If something or someone makes you doubt yourself at the moment, trust your instincts. However, no matter what happens, think twice when you want to make things more stressful or make decisions that cannot be undone. Don’t rush, no matter how irritated you may be in the next few weeks.