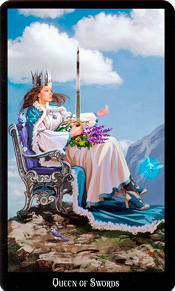 I. Keywords and corresponding associations to the Queen of Swords Witches Tarot

II. Meaning of the Queen of Swords Witches Tarot

The beautiful Queen of Swords Witches Tarot is sitting on the top of a high mountain. Bright white clouds are rising in the wind. Her throne is solid yet ethereal with lark carvings on the handrails and overall design. The wind swirls her long brown hair around and behind her thoughtful face. She has smoky gray eyes and a serious expression. In her right hand, she holds a beautiful shining sword. Her left hand seems to be calling someone. The queen wears a white dress with azure accents. A sky-blue gown with white fur trim covers her shoulders and back. The sharp crown is set with golden topaz. The golden topaz in the crown encourages the achievement of personal goals. She wears a large necklace studded with blue topaz around her neck. Blue topaz evokes truth and wisdom.

In her bodice is a small bunch of fragrant grass related to the element of air. She holds lavender which is protective and the lily of the valley which means a return to happiness in the language of flowers. The blue jay reminds us to rely on our own sense of sovereignty, develop self-efficacy, courage, and consistency of actions with words, like the Queen of Swords Witches Tarot. The winged fairy hovering nearby is the god of the wind, an air elemental being, and seems to be serving the queen.

III. Message of the Queen of Swords Witches Tarot

The Queen of Swords Witches Tarot is a brown-haired woman with yellow to hazel eyes. She is skillful and shrewd with a restricted mind and a sharp tongue. When this card appears in a Tarot spread, it signals a time when you need to pay attention to your instincts and intuition. New ideas are flooding in. It can indicate it is time to try something new. This card basically represents a woman in the air element of the Zodiac who is career-oriented, honest, focused, and successful in whatever she gets her hands on. She can be sarcastic at times but is very tactful, straightforward, and steadfast. She will govern her home and family with the same ruthless organization she uses at work. Her communication skills are top-notch. She can be a scholar, a writer, or an orator. Although men are attracted to her appearance, they often tend to turn away when they discover her ingenuity and sincerity. She has no time for pretense and ignorance.

The Queen of Swords Witches Tarot can represent a woman who is slow to trust others and prefers self-control, especially in relationships. This queen will listen to her reason first and logically weigh her options before trusting her heart. The message from the Queen of Swords is to assert your independence, stand up for yourself, follow your intuition, and try something new.

The personality of the Queen of Swords Witches Tarot combines the positive Air elemental energy of the Sword suit with the introverted focus of a Queen. You can always rely on her to know exactly how things will turn out. Above all, she indulges insincerity and lives by her commitment to authenticity. Lies, deceptions, and jokes are not her concern as she is not easily deceived. She experiences many things in the world, both good and bad. The Queen of Swords can judge circumstances quickly. She understands the foolishness of people but does not reproach them. She knows when to avoid trouble and simply finds a clever way to get through it. She likes honesty and frankness. Her observations are impartial but never hurt anyone. In fact, this Queen character has a sense of humor. She loves to laugh and is always witty. She knows that life does not have to be taken too seriously all the time. The Queen of Swords is always fresh with her outspokenness and no pretense.

In a Tarot spread, the Queen of Swords Witches Tarot asks you to think and feel like her. For example, are you completely sincere? Consider this first! Would you notice the joyfulness in a situation? Are you focusing on the right focus? Do you understand what is going on? Do you allow yourself to be deceived? This Queen also represents a man or woman like her or an atmosphere of genuine and frank communication. She tells you that her special energy will be of great help to you at this time. Let yourself be inspired by the Queen of Swords in whatever form she comes into your life.

IV. The Queen of Swords Witches in a Tarot spread

Unlike the other Queen cards in the Minor Arcana, the Queen of Swords Witches Tarot is ostentatious. This queen turns her back on her old experience and continues to look ahead. With one hand gesturing to the things placed in front of her, the other holding a sword. The message is clear that she is ready to fight against it all. She is the one who is not bored with what life brings because she has also overcome many scandals of the past. When the Queen of Swords appears in a Tarot spread, it has several meanings. Sometimes it represents a certain strong woman, which may or may not contribute to your growth. Sometimes the card appears when you need to be reminded to accept life with sincerity and openness. The Queen of Swords often appears when a woman has passed through a toxic love affair.

The Queen of Swords Witches Tarot can refer to one woman in your life. This is a person you should not take for granted. This woman has black hair and black eyes. If not referring to a person, the card can mean that you need to be strong and honest in some situations to meet your own needs. You may need to push yourself harder. In general, the Queen of Swords can imply that your instincts are working very well. You already know what you want and need, now you just have to go after it. However, be aware of the limitations of others when you do. This Queen card carries a strong flow of energy that some people will find annoying.

When appearing with the King of Swords, the Queen of Swords Witches Tarot indicates that your wisdom is affecting an entire organization or group. This is a perfect match when it comes to career or when it comes to new projects. You have the potential to be an excellent leader, just remember that you need to use your power for good. At first glance, the Fool may seem like the opposite of the Queen of Swords, but together they make an interesting pair. It means that your goals can be achieved by thinking outside the box. Since the Fool is often more eccentric than the experienced queen, this combination indicates that you should take the path few take and that instead of general principles, rely more on your instincts. You have already accumulated a lot of the knowledge needed to achieve your goals. Be brave and plunge into the new path.

In terms of work, even if you may be very clear about what you want to happen in the work environment, this is still not the time to communicate your views. Don’t overdo it with any belittling or disrespect. If you are looking for a job, then you are in a good time to express yourself right now. Rely on the women in your life to point you in the right direction.

In terms of love, the only note about the Queen of Swords Witches Tarot is to be careful with impulses that are too strong. We have all been taught that we will get a lot more out of it if we behave with kindness. That view holds true in this case. Your mother or someone who looks like your mother can get in the way of your relationship, whether she wants to or not. Find out where your limits are with this and let the woman know.

In terms of finances, the Queen of Swords can indicate that a woman will play an important role in your finances. There is a lot you can learn from her if you are open to what she has to say.

In terms of health, you may be suppressing your emotions which will negatively affect your body. You still need to be careful with how, when, and where you can release your emotional reactions. Anything that can reduce your stress will help you, even a 5-minute walk a day. Let’s stop, stay calm, and make the right choice.

In terms of spirituality, the Queen of Swords Witches Tarot may imply that your emotions are the gateway to your spiritual life. Think about what you are feeling and the reason for this thought. Then stop thinking and feeling. Keeping a dream journal can be an especially wise decision at this time. Be open to spiritual messages every day.

The reversed Queen of Swords Witches Tarot can often refer to one woman in your life. That may not be a good woman. Usually, she will have dark hair and dark eyes. You will want to associate with this woman’s good side if you can. She can (sometimes inadvertently or unintentionally) prevent important things from being completed. In general, the Queen of Swords in reverse can refer to unexpected obstacles most often caused by those around you. But sometimes, it also implies that you are creating those obstacles yourself. Do you behave in a way that bothers others? If you don’t know, ask someone you trust to clarify.