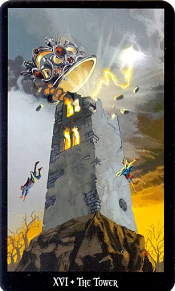 I. Keywords and corresponding associations to the Tower Witches Tarot

The Tower Witches Tarot card depicts a dramatic discovery or an unexpected change of plans. The stormy, dark sky surrounded the tower that is perched high on the cliff. Lightning slithers from the storm cloud and hits the tower, knocking the crown off the top. Inside the tower, there is a fire, representing purification and transformation. There are two people falling out of the tower and they are plunging headfirst. This shows us that the event is completely out of their control.

The tower represents our ambitions while the ruby ​​crown represents the ego. According to many magical legends, rubies are often used to enhance perception. The lightning in the picture shows that there is a sudden insight at the moment, and the clear light of truth will illuminate any troubling situation. Obstacles are being broken down, and negative energy is finally being dispelled. Transformation is taking place; At this point re-evaluation is essential. You are being forced to step out of your pleasant little world and now you will have to deal with the consequences.

The Tower Witches Tarot speaks of a terrifying discovery or event that forever changes the way you see yourself and the people around you. This is not necessarily a negative thing. Now that all pre-existing pressures are released from the tower, the fire within will purify and transform it. Heaven’s secrets are discovered; You may be dealt a blow to the ego, but you will survive the mayhem. Change will come, and it will be dramatic. The mental obstacles or hindrances you once faced have now been lifted. What you learn will be useful in the long run.

The Tower is a disturbing card. Fire, lightning, and broken rocks – absolutely the scene of big trouble! This 16th card will not be welcomed by those who do not like change. It represents a major, sudden shift or reversal of fortune. Often change happens gradually, giving us time to adapt. But sometimes, it happens too quickly and suddenly. This is the influence of the Tower.

In movies, sometimes there is a scene where the main character gets drunk or mumbles something, then gets hit or slapped by someone else. This image proves that after doing everything possible, sometimes people have to accept pain to get out of a certain situation. Sudden events are life’s way of picking you up. Some things are not going the way they used to, and you are not responding to those changes. Are you too arrogant? Expect a wind to shake your ego. Are you holding back your anger? Let it explode. Are you drowning? Expect something unexpected to happen.

The way you react to change by The Tower Witches Tarot makes all the difference in experiencing an unpleasant change or event. Realize that the breakdown has happened because it was necessary. Perhaps accepting change is too hard. But try to find the positive in it. In fact, you can feel great relief: You have finally been turned in a new direction. You can explode into thinking deeply about your situation, and gain a new level of understanding.

IV. The Tower Witches in a Tarot spread

A tall stone tower burned by lightning is the image depicted on the Tower Witches Tarot. The appearance of this card in a Tarot spread can bring a sense of shock to many people. The Tower is about change – the metaphor behind the lightning that knocked the tower down. This card image depicts the inevitable chaos, however, this is rarely scary. Change is coming, and you may not be ready. Every change in life needs to be accepted, both positive and negative. There are aspects of your life that are nasty, but other aspects are flourishing.

The Tower Witches Tarot is about gain and loss, even if you feel desperate at times. It brings powerful destruction if you let it happen. Take this as a warning, not a judgment. Stay calm in the face of difficult times: Learn the lessons of change, and treat change as the necessary catalyst to create new opportunities. Like the Shadow Side and Death, the Tower is not a scary or ominous card as it appears in most Tarot decks. Trying to hold on to a state too tightly can be detrimental to you in the present. Know to go with the flow.

It seems that there are some people/situations that you believe will always be for you/always be a place/someone you can rely on becoming change is no longer the same. And you can no longer rely on those people/situations. This problem is not something so terrible. Change is the nature of life, and trying to stop it is like swimming upstream without a paddle. If you have been daydreaming about this, it might be time to come back to reality. You will be in trouble if you keep letting yourself go. You will be able to replace them with realistic dreams and goals that are easier to achieve than clinging to illusions that are slowly falling apart. Dreaming is important, but just as important is being realistic. You will make it through this time well, especially if you know that: You have all the resources you need to deal with life’s problems, and to do what you need to do.

When The Star appears with the Tower Witches Tarot, it makes sense that the event hinted at by the Tower will get better as long as you follow your intuition. The Tower when appearing with the Lovers speaks directly about your personal relationship. This is a sign that ties will be broken, but you also need to focus on building relationships with others.

In terms of work, your energy at this time tends to lead to arguments or conflicts. Try to keep your temper under control. Sudden reversals can happen now. However, it is a warning sign to prepare rather than to panic. Even if you think you have the most stable job or source of income in the world, what would you do if they all disappeared tomorrow? Where can you move to work immediately if you are forced to leave? Thinking clearly now, when you are not in a crisis, can be a big plus for you in case you fall. If you feel displeased with your current job, think seriously to decide to change. You deserve to be happy!

In terms of love, this can (but is not necessarily) a sign of the relationship coming to an end. If you really don’t want to let go, this is an important time to control the threat and to have an honest conversation. Find out how your partner is feeling. Do not speculate or hypothesize yourself, but find out clearly.

In terms of finances, this is not the time for risky investments, gambling, or betting your luck to solve your problems. Even if you know the news is not so good, find out exactly what financial difficulty you are facing. It might not be as bad as you think. However, avoiding trouble is still better. Let’s solve the problem in a simple way.

In terms of health, it is very important to pay attention to what you are doing right now. You may have a nervous breakdown. Do whatever it takes to calm you down and stay in a stable mood. Exercise can help you a great deal. If you know what you are doing (and know about your allergies or your doctor’s approval), then consider trying herbal relaxation. Be careful with drugs and alcohol during this time (if you are taking them).

In terms of spirituality, this is also a time to keep an attitude as positive as possible. Always trust the blessing for you, and do not take on things that are collective instead of personal. New insights and perceptions can come to you in the blink of an eye.

Whether in the reversed or upright position, the Tower Witches Tarot is still a card of change. This is the time to embrace and accept the change.

The reversed Tower indicates that there is a chance that some people/ situations that you are familiar with will be able to change and of course you won’t be able to depend on it anymore. Try not to think too much about this. It does not mean a big, terrible change in your life. It is merely a few adjustments. Keep your mind clear on the fact that you always have – or can get – all the resources you need to solve your life problems and do what you need to do.