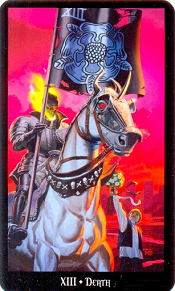 I. Keywords and corresponding associations to Death Witches Tarot

The Death Witches Tarot card is one of the most misunderstood cards in the Tarot deck. It rarely symbolizes physical death; instead, what it announces is a radical change in the querent’s life. In this card, Death’s skull is lit with a brilliant flame. The skull is a symbol of human death, and it is the resting place of the mind. The yellow-green flame represents energy and rational power. Death’s armor is dark and well used; The white horse also has fiery eyes and has a set of bridles decorated with skulls and crossbones. Death holds a flag representing transformation. The flag is decorated with the number thirteen – the number of full moons in a year – and on the flag is a five-petaled white rose, symbolizing the natural cycles of life. The red sunset sky in the background corresponds to the end of a day and the end of a chapter in your life.

The child standing in front of Death Witches Tarot presents a bouquet of white daisies that matches the white, red, and black ribbons of the Triad of Goddesses. In the language of flowers, white daisies represent innocence. It is important to note that the child looks up and faces Death while holding the flowers. He is happy, confident, and unafraid of this rider; He welcomes change. The child represents hope.

Death Witches Tarot, of course, represents change. For something new to flourish, the old must give way to it. This card often appears in spreads of pregnant women, which makes sense. Think about it: their lives are about to change forever. It will transform into something new and exciting.

This card also symbolizes other important endings and beginnings in your life: giving birth, getting married, getting a new job, graduating from college, moving house, etc. Basically, a lifestyle ends, leaving room for new beginnings and opportunities for growth.

Here we face our greatest fear – the greatest mystery we cannot know. We involuntarily cringe at Death because we see it as destruction. In the Tarot (and in life too), Death is not the final ending, but the transition to the next stage. The essence of life is eternal, one way or another. Grow, move, and live – we must “end” the old to make way for the new.

The obvious truth in the Tarot is that this 13th card has nothing to do with physical death. A Tarot reader would likely never look this way as it is too narrow. Death does not happen only once to the body. It always happens on many levels, not just physical. Every moment, the present we “die” is to reveal the future.

In a Tarot spread, Death Witches Tarot often represents an important conclusion to usher in a major change. It signals the end of an era, the moment the door closes. At that time, sadness and reluctance are unavoidable. However, relief and a sense of certainty will also be present. Death also advises you to return to the foundation. Giving up is the way to focus on the things that really matter. This card reminds you to give up unnecessary things. Death can also mean that you have to accept absolute influences. Death is inevitable, and sometimes it is inevitable. When these things happen, the best way is to flexibly steer your destiny and wait to see where it takes you.

Often depicted with the image of death, Death Witches Tarot may seem terrifying to those unfamiliar with skulls and bones, but fear not. While Death is certainly associated with the end, it is also a symbol of resurrection. The current chapter is coming to an end, and you are entering the next phase of your life. Death is more about closing and leaving the past, rather than a reminder of everything about to wither like the old rose garden. This card reminds us to let go of old habits as well as renew ourselves, that is the way to make things better.

Death Witches Tarot does not necessarily refer to physical death. In fact, in general, those who read the card in that way will be seen as superficial. Since we are free beings, no one has the right to decide such things. The card is simply aimed at transformation and change. This is definitely the time to change in-depth, both internally and externally. Circumstances, things, people, etc, that you have always been familiar with and trusted in may no longer be there, or still be there but not as before. This change can be quite difficult for some people.

The more you learn to accept and let go of your desire to be in control, the easier this time will be for you. Often, the things that you need to let go of are beliefs and attitudes that limit yourself. Sometimes you don’t know how much your perspective has hurt you. And if that is the case, then this is the wake-up call. The dominant energy now is not only change or destruction, but following it, is revival. Even if one door closes, another door opens. But are you brave enough to step through?

If the Tower appears with Death Witches Tarot, be prepared for a situation with a bad and unsatisfactory outcome. Although it sounds terrible, there is a blessing in disguise. This is a sign that you need to move on. When Death meets The Lovers on the cross, it can mean two things. Based on which card appears first, this combination can refer to the end of a relationship or the beginning of a new one.

In terms of work, if you hate your job or are working in a job that is underwhelming but you don’t want to quit because of a steady income, you may end up being pushed to the point of giving up. This will, of course, lead you to “the better”. But why don’t you choose to leave yourself? You can benefit most from radical change. Be decisive, just take a big leap. You can do it.

In terms of love, if you are clinging to a relationship where you are not happy just because you don’t want to leave the familiarity or because you hate being alone, you are not helping yourself or your partner at all. Let’s talk frankly. If your partner doesn’t want it or it cannot change anything, then maybe it is time to let it go. If you have the courage to leave the comfort zone of this relationship, you will find another that is much better. But first, you have to face the problem and try to solve it. Not every relationship can be “fixed”. Don’t bang your head against the wall for too long.

In terms of finances, you may have to make some sacrifices to face upcoming financial difficulties. Don’t hesitate to ask for help if needed. You don’t have to be stuck and suffer alone. Things don’t need to go that way either, although there is a high chance that you will suffer financial loss due to job loss, falling stock prices, etc., don’t run away from reality if this happens. Determine exactly what you are facing and deal with it, then do what needs to be done. In the end, you will get more out of this lesson. You will be fine for the long haul.

In terms of health, managing stress is the way to stay healthy during this period. Find a way to solve any physical problem, don’t shy away. Get enough rest and do not poison yourself with alcohol and the like. If you need to recover, pay attention to both the physical and mental aspects. Especially if you are single, at this time, find the feeling of being “touched”, comforted, massaged, hugged by loved ones. These will help you a lot.

In terms of spirituality, Death Witches Tarot brings the message to cultivate positive attitudes. Understand that even if you are lost, everything will pass. Don’t resist change. Allow yourself to feel what it really feels like, but don’t wallow in despair. If you need help pulling yourself out of any pain or loss, step outside of your comfort zone and welcome whatever it may come. There is always someone out there willing to share with you. No matter how lonely you may feel, the truth is that there are more people who care about you than you think.

In almost every situation in life, when one door closes, another opens. Chances are you need to accept the loss more and move away from the situation that is keeping you trapped. One of the hardest lessons in life is accepting that you won’t always be satisfied with the outcome of an event, but the reversed Death says you must learn to move on.