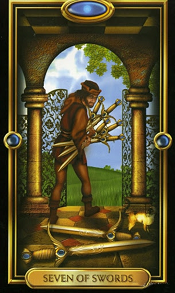 I. Meaning of the Seven of Swords Gilded Tarot

On the Seven of Swords Gilded Tarot, we can see a suspicious figure carrying five swords and retreating from a building. He clearly intends to disarm the enemy. However, his plan seems spontaneous and reckless. He cannot even carry all his swords. It is almost certain that his actions will infuriate his enemies so much that one of the swords he leaves behind will return to stab him in the back. Unlike the discipline and willpower of The Chariot Gilded Tarot, the card numbered VII of the Major Arcana, this character reacts to situations irrationally and dangerously.

II. Message of the Seven of Swords Gilded Tarot

The message of the Seven of Swords Gilded Tarot is that you are facing a problem. Worse than that, you are contemplating a bad plan to deal with it. Review your solution and try to figure out which one yields a more satisfying result. Be careful with impulsiveness. Your actions have consequences and you will do well if you consider the consequences before acting.

III. Interpretation of the Seven of Swords Gilded Tarot in a spread

In a Tarot reading, the Seven of Swords Gilded Tarot can be a sign that you or someone else wants to be a lone wolf. You feel that you will be more efficient and comfortable by being active on your own. This method is useful when you need to avoid an underperforming group and want to be assertive about your independence. But on the other hand, this idea can also cause trouble. We cannot be happy and thrive in the long run without collaborating with others. If you feel inclined to act alone, make sure this separation really works for you.

Sometimes the Seven of Swords Gilded Tarot implies that you are running from something, be it commitments, responsibilities, hard work, or your love life. You may be procrastinating, letting problems slide because you don’t want to deal with them. Sometimes we have to face what needs to be faced. The Seven of Swords card is a message to you that you may be making things worse for yourself and others by running away.

In the Major Arcana, the Seven of Swords Gilded Tarot is one of those cards that reveal many surprises. It is important to be ready to hear things that can hurt. In the past position, the Seven of Swords has several different meanings, but it basically refers to a time when you or someone else is deceived. Chances are your lover or spouse has been unfaithful, and this is the first time you have heard it. Remember that the past will still be the past, but how you take in and process this newly revealed information will affect upcoming events in the future.

The Seven of Swords Gilded Tarot in the current position means that there is currently deception in your life. Someone has lied to you and gone undetected, and they will continue to do so until you intervene. If you are the subject of deception, this card is showing that everything is going in your favor. However, you should also know that the person you cheated on can feel hurt. Sometimes a few white lies are not such a terrible thing, but repeating them over and over can make your loved ones frustrated if they find out your lies in the future.

In the future position, the Seven of Swords Gilded Tarot is only about you. It tells you that in order to move forward, you need to rely on your own strength and use your ability to improvise to deal with unexpected obstacles in life. The good news is that you will get out of those troubles. However, the bad news is that what you plan to do could ruin your plan so far, so think carefully about the consequences of your actions before you do it!

In terms of work, the Seven of Swords Gilded Tarot means that your work is being closely observed by your supervisor. It is important that you keep up the hard work and mind your own business, as well as double-check what you have done before concluding it is done. Don’t let yourself break your work discipline at this time.

In terms of love, the Seven of Swords Gilded Tarot shows a huge lack of trust. If you have made a commitment, this card indicates that you are not trusting your spout/lover and accusing them of being unfaithful. It is important that you tell them even if it hurts. Spying on your partner’s texts only makes things worse, so avoid that option and try to have a straightforward conversation instead. If you are in the process of finding a way out, the Seven of Swords sends the message that your partner might not know exactly what you think. If you are meeting someone interesting, but there is no chemistry or real spark between the two of you, chances are you are being seen as boring. Change your tactics and show that you are ready for love.

In terms of finance, while seven is considered a lucky number when it comes to money, the Seven of Swords Gilded Tarot brings bad news. Trying your luck will end up costing you more than you are willing to take, so don’t gamble, borrow, or invest for the time being. If there is a monthly expense you don’t need, cut it out and put it in your savings account. Savings are top of the line these days.

In terms of health, the Seven of Swords Gilded Tarot says that in order to improve your health, you need to get rid of things that are noisy, messy, cluttered. It could be anything physically or mentally, so you need to be honest with yourself as to what you are getting rid of. This card often appears when someone has a hoarding obsession. You need to get rid of this junk as soon as possible. If your problem is in your thoughts, you may need to find a way to put your mind at ease, so that stress does not cause any particular illness.

In terms of spirituality, the Seven of Swords Gilded Tarot tells you to beware of influencers or religious or spiritual leaders who want you to spend money for so-called “enlightenment”. The truth is that you don’t need a spiritual leader to learn and grow spiritually. Check it out for yourself. Besides, you should also be careful with people you have just met with similar spiritual thoughts.

When the Seven of Swords Gilded Tarot is reversed, it points out that you are ignoring useful advice. Your situation is not as desperate as you think it is, and you are kicking people who really want to help you out of your life. You can have everything you want, but you need to realize that you are devastating yourself and change that.

The reversed Seven of Swords Gilded Tarot reminds us that sin does not do you any good and it will never be. If you receive this card under the circumstances that you are about to commit deception or fraud in some way, it is a clear statement you will detect – as simple as that. Think carefully. And if you have noticed that someone in your life is cheating on you, there is nothing as simple as forgetting about that person. They have to explain that if you want to keep the relationship. This does not mean that you need to assume or imagine that someone is cheating on you. The card only implies the above if you know it is really them.

This is the time to think carefully about how things “will be done,” and whether or not you will meet those requirements. This could be a time to streamline your actions. Take it one step at a time and don’t try to do everything at once. Deep down, you already know what is most important to change.

In terms of work, like the upright Seven of Swords Gilded Tarot, the appearance of the reversed card can mean that your boss is looking at your work closely. This is not the time to “ignore” the task at any rate or in any way because you will certainly be discovered. Something that seems so trivial to you at first glance (like taking home a few office stationeries) can cause a serious loss of trust from your superiors and lead to major problems later, to the point where you may face the possibility of losing your job. If you are looking for a job, put your credibility and willingness to the commitment.

In terms of love, the reversed Seven of Swords Gilded Tarot signifies that you may have a feeling of dissatisfaction about your relationship. If that is the case and you are in a committed relationship, think carefully about the reason and what is making you unhappy before bringing it up with your partner. Also, consider your role in the discord or problems you are having in the relationship. Is there something you should or could do differently?

In terms of finance, when the reversed Seven of Swords Gilded Tarot appears, you may be about to receive some good advice about money but you will probably ignore it. Listen carefully to what others say. This is not the time for risky investments with your finances of any kind. Make sure you know what you are doing. If you feel like something is so good that it can hardly be real, then it really is not.

In terms of health, trust in the wisdom of your body, the supreme resource, and of the universe when the reversed Seven of Swords Gilded Tarot appears in your reading. If you think you need more rest, just take a break, even if you are just getting back to your normal life after your vacation! If you feel like you are being urged to talk to someone about your health problems, do so. At the same time, don’t hesitate to seek advice from other sources if the issue involves a major phase of therapy.

In terms of spirituality, the Seven of Swords Gilded Tarot tells you that this is a good time to keep your own secrets when it comes to matters of spiritual beliefs. You can associate with other people without having to believe everything according to them. However, if you have an open mind, you will be able to receive new spiritual wisdom at times from other people (and from the universe) no matter how hard you really try to seek new knowledge. Sometimes inspiration can come in a matter of seconds.