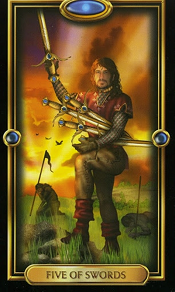 I. Meaning of the Five of Swords Gilded Tarot

On the Five of Swords Gilded Tarot, we can see a warrior standing in victory and wielding five swords. The dawn is breaking and revealing what is left of his opponent. Those who are defeated in the background are not to emphasize the victory of the warrior. Instead, the picture is about a Pyrrhic victory (win with heavy losses). While it is clear that there are winners and losers in this match, it is not clear if the price of victory is worth it. War or any destructive battle has its price. One of the things that The Hierophant Gilded Tarot, the card numbered V in the Major Arcana, is about is the lessons of human history. Whether the warlike method of control is always worth the effort is unclear. This is a lesson that has not been fully resolved.

II. Message of the Five of Swords Gilded Tarot

The message of the Five of Swords Gilded Tarot is that you are at the end of the battle. Are you a winner or a loser? Either way, what do we lose and gain? Is it worth it? What did you learn from this experience? Be careful not to view the battle as the only or easiest way to resolve disputes. Both sides pay a high price. Perhaps a more harmonious approach will serve us better in the long run.

III. Interpretation of the Five of Swords Gilded Tarot in a spread

In a Tarot reading, the Five of Swords Gilded Tarot can imply that you or someone else is letting go of a perspective, a larger view of the self. You are defining your interests too narrowly. If you keep trying to do things alone, your actions will come back to haunt you later, one way or another.

The Five of Swords Gilded Tarot also represents opposition – it can be as simple as an argument to something more serious like a war. When the strings that connect us are broken, we will experience discord. This card can imply that the loss of honor is quite large, be they scams, lies, cheats, tricks, even crimes. You can be the one who suffers from the above or the culprit that causes them. Either way, keep a broader perspective of who you are. Let’s go find the best solution for everyone, including yourself.

When the Five of Swords Gilded Tarot appears in a reading, it usually indicates that you are involved in some kind of conflict. Therefore, you need to be careful. Even if you seem to be on top, the outcome can still be a failure for you. Although in some situations the card can indicate a win for you, most of the time it points to a loss. It sounds like these two interpretations are at different extremes, but in reality, when you win in one area of ​​the conflict, you can still fail in another. The card tells us that sometimes it is better to lose than to gain.

The type of conflict that this card shows for each person is usually not the good kind at all. If you are not currently in a conflict, then beware of getting stabbed in the back. It is easy to receive some unpleasant surprises from someone relatively close to you. This is the time to raise your guard. The deeper meaning of the Five of Swords Gilded Tarot is, you have to choose your own battle. For your own sake, do not waste energy on conflicts. Even if the battle is over and you win, the loss of your time and energy into it is considered your failure.

In terms of work, the Five of Swords Gilded Tarot is a warning that your biggest enemy at work is yourself. Don’t expect the entire system to change just because you believe it needs to be. How you think is just as important as what you say. While you may be experiencing some injustice at work, make sure you behave and act accordingly.

In terms of love, when bringing the general meaning of the Five of Swords Gilded Tarot into your emotional relationship, it easily indicates that you are experiencing some kind of confrontation. An important step in handling this conflict is trying to get past what is on the surface. Try to identify the root of your problems in your relationship. Then, try to have an honest conversation with your partner to determine what is the best way to handle the problem.

In terms of finance, whenever the Five of Swords Gilded Tarot appears, you should memorize the mantra: “be careful”. Try to be tight in your spending and investments. This is definitely not the time to overspend all of your savings on shopping.

In terms of health, the Five of Swords Gilded Tarot advises you to take some time to relax, as everything around will get hectic. It is quite normal to experience feelings of intense stress in the future. Therefore, you need to pay special attention to taking care of yourself.

In terms of spirituality, even if you suddenly find the answers to the spiritual problems you have been looking for for so long, remember that they are the answers for you and no one else. You don’t have to try to convert anyone else to your way of thinking. The Five of Swords Gilded Tarot can also mean a break in the spiritual aspect that is no longer working for you. Give yourself time and space to find new answers.

When the Five of Swords Gilded Tarot is reversed, it signifies that you have had enough battles in your life and you are ready to move on. What a wise decision! However, this card in reverse also shows that you are having difficulty coming out of conflicts. Keep trying, even if it is exhausting you. In general, the reversed Five of Swords points out that there is negative energy associated with previous conflicts – that energy is still present and is preventing you from achieving what you want with your potential. Please put more effort to put an end to it and move on in life!

When the Five of Swords Gilded Tarot appears in reverse, you may be feeling the urge to prove to someone that you are right about something – and that could be a serious waste of your time and energy. If you are right, you are always right, and it does not matter if other people believe you or not. Spend your health and energy on more profitable and useful things.

The reversed Five of Swords Gilded Tarot is a sign that you may be hurting yourself. Know how to pick the right choice and consider. Not everything is worth diving into and arguing and not everyone is worth fighting for. Consider your priorities and what is most important to you.

In terms of work, the reversed Five of Swords Gilded Tarot implies that you can do something to your detriment. In a peaceful environment, you should not cause conflict if you don’t want to lose your job, and don’t escalate tensions if a conflict has already occurred. Accept the situation as it is unless something illegal or unethical happens, and if so, consider reporting it to the authorities. Some things are too complicated for you to handle on your own.

In terms of love, when the reversed Five of Swords Gilded Tarot appears in a love reading, you may be sacrificing your happiness just for a need to show/feel that you are right. Many people often ask the sensitive question, “Do you want to be ‘right’ or do you want to be happy?” Sometimes you have to lower your ego and simply accept everything, whether you are looking for love or in a long-term relationship.

In terms of finances, you may encounter some money conflicts when the reversed Five of Swords Gilded Tarot appears. Stay calm and look at the root of the problem. Did you make any mistakes? If so, admit them and find ways to correct them. Are you or your loved one putting too much focus on the money matter? Solve problems one by one, don’t try to avoid them.

In terms of health, the reversed Five of Swords Gilded Tarot shows that you may be very stressed at the moment. However, at least some of the reasons for this are actually your own. In hindsight, you will find that you have some control over your feelings of stress. You cannot bear everything on your own. Take time to rest and relax, and know that not everything is perfect. Either way, you are still just human. Learn to forgive yourself.

In terms of spirituality, you may end up following a traditional spiritual idea that you believed in before. For instance, you might tell your partner that you no longer want to participate in the rituals of your/his/her faith community. This can give a feeling of “winning”, showing that you know how to stand up for your wishes. However, your spiritual life cannot be stopped or lost so simply. How to meet spiritual needs? Do not assume that the spiritual element is no longer necessary. Seek sharing and knowledge from people with similar beliefs or systems of thought.