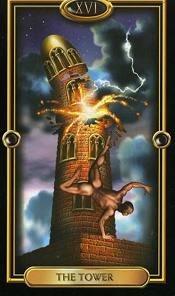 I. Meaning of the Tower Gilded Tarot

Meticulously carved, tall, beautifully composed, and powerful, the Tower Gilded Tarot represents our view of the world. We can add and change it if needed. We expect it to last and serve us well. The tower was destroyed by a bolt of lightning from the sky. In one way or another, lightning is a symbol of illumination, perception, experience, causing our world to fall back to where it started. We fall like the naked from this building. Now we have to rebuild. We seem to have nothing left. However, do not be indifferent to what lightning opens up for you.

The message of the Tower Gilded Tarot is a difficult one. Unlike the Wheel of Fortune, which carries a central philosophical message and Death with its promise of spiritual improvement, the image of the tower does not seem to refer to much except the destruction. Our belief system helps us find calm at the center of the wheel, encouraging us to have the courage to face death. In the Tower, that belief system has been broken. The good thing is that what is broken is usually due to some fact that we did not realize before. Knowing the truth is good, ignoring it does not really bring happiness. Let’s beware of extreme situations. If you get angry easily at everything in life, you will find yourself too unprepared to deal with real trauma and tragedy.

III. Interpretation of the Tower Gilded Tarot in a spread

It seems like there are certain people/situations that you believe will always be there for you that are no longer the same. And you can no longer rely on those people/situations. This problem is not something so terrible. Change is the nature of life, and trying to stop it is like swimming upstream without a paddle. If you have been daydreaming about this, it might be time to come back to reality. You will be in trouble if you keep complaining about it without taking any action. You will be able to replace them with realistic dreams and goals that are easier to achieve than clinging to illusions that are slowly falling apart this month. Dreaming is important, but just as important as being realistic. You will make it through this time well, especially if you have all the resources you personally need to deal with life’s problems.

The Tower Gilded Tarot is a card about change. Like the Devil and Death, the Tower is not a scary or ominous card as it appears in most Tarot decks. Trying to hold on to a situation too tightly can be detrimental to you in the present. Instead, let’s learn to embrace change. As with the other cards in the Major Arcana, it is important to observe both the cards that appear with the Tower and the position of the card itself in the spread. Those things help you better appreciate which aspects of your life the Tower is alarming.

When the Tower Gilded Tarot appears in the past indicative position, it implies a situation in the past where you have not ended well. It could be a broken friendship, a conflict with a family member, or an unexpected rift in love. Whatever the specifics, that situation has not been thoroughly dealt with and is the source of the current problem. If you are feeling alright, watch out for the potholes of the past. In the current indicator position, the Tower carries the message that great change is coming. It is important to consider what your position is and whether there are areas of your life that are falling apart. Maybe you ignored the alarms before. If so, prepare to receive unexpected surprises from the sky. Be alert and look at the cards referring to the past and the future to determine which aspect of your life it is affecting. When appearing in the futures position, the Tower confirms that the alarm signals have clearly appeared. Change is inevitable, but this is the most beautiful position because it says you are prepared, consciously or unconsciously, for change.

In terms of work, the Tower Gilded Tarot challenges you to think about the skills and talents you can use when your position is shaken. Pay attention to the risk of losing your job and take advantage of the time to look for opportunities. You would better take this opportunity to start and find yourself a better way out than the one you were forced to leave behind.

In terms of love, has there been an honest and open dialogue between you and your partner? When appearing in a reading about love, the Tower Gilded Tarot says that the relationship between you two is about to change. While this is not necessarily a bad omen, it is more important to understand that change is something that must happen. For those who are single, the Tower tells you to rethink how you take care of yourself and the people you attract in your life. Something needs to change if you are expecting luck in love.

In terms of finance, this is not the time to take risks with money. It is important to keep your savings secure as when change comes along, it will blow everything away. Be prepared for financial difficulties.

In terms of health, the Tower Gilded Tarot reminds you to be realistic about your body condition. If you have been worried about the possibility of getting sick, this is a sign that you should stop before you become really hurtful. If you have recently undergone surgery or any serious health problems, the Tower brings the good news that you will be fine soon.

In terms of spirituality, this is also a time to keep an attitude as positive as possible. New insights and penetrations can come to you in the blink of an eye.

In reverse, the Tower Gilded Tarot indicates that change has begun. Whether you are affected or not is irrelevant. Suffering until the chaos ends is your best course of action. Whether appearing in reverse or upright, the Tower is still a card of change. Like the Devil and Death, the Tower is not a scary or ominous card like it appears in most Tarot decks. This is the time to embrace change and move forwards with transformation.

When the Tower Gilded Tarot card appears in reverse, it still carries the unfortunate meaning that there is a chance that some people/situations that you believe will “always be there for you” will be able to change. Try not to think too much about this. It does not mean a huge or terrible change in your life. It is merely a few modifications. Keep your mind clear on the fact that you always have – or can get – all the resources you need to solve your life problems and do what you need to do.

In terms of work, people around you may often be experiencing stress, arguments, conflicts, or misunderstandings that can lead to unpredictable consequences. It is important that you do not behave in a selfish way. And don’t let yourself get involved in unnecessary conflicts or let your ego take over you. With the Tower in reverse, it is especially important to think carefully before speaking.

In terms of love, the reversed Tower Gilded Tarot foretells that, in general, things related to love will not be as harsh as when drawing the upright card. However, this is still a signal that each side needs to be invested and exchanged more with each other if you want this relationship to thrive. Think positive and don’t focus on “changing your partner”. Consider how you can contribute to and improve your own negative part of the relationship. Take it one step at a time and don’t lose your enthusiasm.

In terms of finance, the Tower Gilded Tarot in reverse suggests that this is still not the time for venture capital or games of chance. Overall, in this situation, your financial problems may not be as big as you fear. There is nothing better than avoiding trouble though. Let’s solve problems in the simplest way. If you need help with your finances, don’t hesitate to ask.

In terms of health, the Tower Gilded Tarot in reverse shows lighter problems than when it is in the upright position. In the next few days, you should be careful and pay attention to what you are doing. Stay calm and know that everything shall pass.

In terms of spirituality, the reversed Tower Gilded Tarot tells you that this is the time to stay as positive as possible regardless of what is going on around you. Always trust your blessings and mind your own business. New insights and perceptions can come to you in a flash.