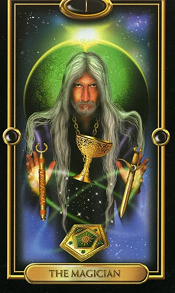 I. Meaning of the Magician Gilded Tarot

The Magician Gilded Tarot is someone who is serious about his job. Besides being a master of magic, he is also a man of science. Unlike the Fool, the Magician is fully aware of the law of cause and effect and conscious of actions and consequences. He is mindful of his willpower. And he is also informed of the importance of his choices. By concentrating the will, the character in this card controls and manipulates the elemental powers represented by Wands, Cups, Swords, and Pentacles which are the tools that the Magician holds. By learning to control the will and the elements, the Magician can accomplish anything he wants.

The message of the Magician Gilded Tarot is discipline and responsibility. You have the power within you to do whatever you want. You also have at hand the necessary tools at your disposal. Focus on your will and sharpen your skills.

III. Interpretation of the Magician Tarot in a spread

When you see the Magician Gilded Tarot on your Tarot spread, be aware of controlled and manipulative behaviors. Holding on to power can blind you to what is right. Remember one negative characteristic of the Magician is that he can be a charlatan or a fraud. The appearance of this card is a really strong signal that you have the power to make a difference. When the Magician appears in the upright position, it indicates to take action now because you understand exactly what you want and how to get it. You feel energetic, dynamic, creative, and have a strong focus on your goals. The presence of the Magician urges you to act now when your energy and confidence are at their peak. The Magician is about making the most of one’s emotional and spiritual powers.

The Magician Gilded Tarot will make higher and better use of all one’s powers, regarding mental, emotional, and other aspects. This is another Tarot card that often signifies new beginnings and big plans. This is a strong and positive omen in readings. It reminds us that we have the power to make a change, in life as well as in the big world, if we simply strive for it. You may notice that many synchronicities point directly to profound Spiritual events occurring despite the significant degree of their superficial appearance. You should find out if you have the knowledge, strength, and inspiration needed to overcome your challenges. Overall, this is a very decisive time for you.

In terms of work, if you are working in a creative field such as art or tarot interpretation, the appearance of the Magician Gilded Tarot says that your suggestions and work will be appreciated. It will have a big impact on your career and really help you get promoted. If you are unemployed, the Magician may indicate that a potential new job is very close to your reach.

In terms of love, when the Magician Gilded Tarot appears in your spread, be ready to accept the change. Your current relationship will become deeper and more fulfilling. If you are single, this is a good time to go out and meet new people. You may find your significant other soon.

In terms of health, this card speaks of a matter of strength. As long as the Magician Gilded Tarot is here, you can expect your illness will pass quickly.

In terms of finance, the Magician Gilded Tarot shows that we are doing a great job combining our skills and possible tools to get what we want. That means your finances will increase soon, even if you do not realize it now. Maybe you are getting a promotion or have found a moonlighting job. Whatever it is, there will be money-making opportunities for you.

In terms of spirituality, this is the perfect time for you to do some kind of spiritual research you have previously thought about but did not have the chance to pursue. You will also benefit from spiritual discussion groups. A spiritual teacher may appear in your life right now. This person will be an excellent coach who will help you see life from a different vision.

When appearing in reverse, the MagicianGilded Tarot indicates that someone is using their skills to manipulate and deceive others. In addition, it indicates that your plan is not going as smoothly as expected. There seems to be confusion at some stage, as well as a lack of a clear plan. You did not prepare any backup plans, so you are having a hard time reaching your goals. The reversed Magician also means a lack of willpower and personal discipline which leads to deception and lies. You should double-check everything before starting a new project. The appearance of the Magician in reverse can also indicate that you need to evaluate if there are skills or abilities you do not utilize at full capacity. You also need to give yourself a chance to show and hone your skills.

The reversed Magician Gilded Tarot can indicate that the querent is hesitant about making the necessary changes to use his or her powers more spiritually and effectively. You can reevaluate to see what you are afraid of. Is it that other people will not like you being a unique person? Maybe you are right while they are probably not. There is no reason not to be the person you really want to be and certainly are to be. Once again, when this card is in reverse, you can be unnecessarily doubting yourself and as a result causing yourself and even those around you problems.

In terms of work, when the reversed Magician Gilded Tarot appears on your Tarot spread, it may indicate an obstacle to a necessary change you need in your work. The truth is that nothing lasts forever. Change and new things are part of life. So, don’t cling to the past to the point of losing your potential opportunity.

In terms of love, the Magician Gilded Tarot can signify that you are losing faith in your ability to find, attract and keep a new love if you are single. You need to stop this attitude now. In a binding relationship, this reversed card can show a reluctance to talk about what you really want and need. This is the time to be strong and express your perspectives.

In terms of finance, the Magician Magician Gilded Tarot in reverse can signify feelings of helplessness and attachment when it comes to money. The truth of the matter is that you can make a change and improve your life if you put on effort. If you do what you have always done, there is no doubt you will get what you have ever got. Think about changes and new adventures that you can try. You may find that they are more successful than you think.

In terms of health, the Magician Gilded Tarot, even when in reverse, is still a sign of improved health. Take good care of yourself and seek medical advice if you need it. Believe in your body’s ability to heal itself. You will quickly see clearly that you are much better.

In terms of spirituality, the Magician Gilded Tarot indicates a need for new experiences and perspectives and even taking on a new path that you used to think and work with with your spirit. Changing your approaches and thoughts over time is aspirational and healthy. You can consider trying new methods and talk to people who see things differently than you do. By doing that, both will benefit.