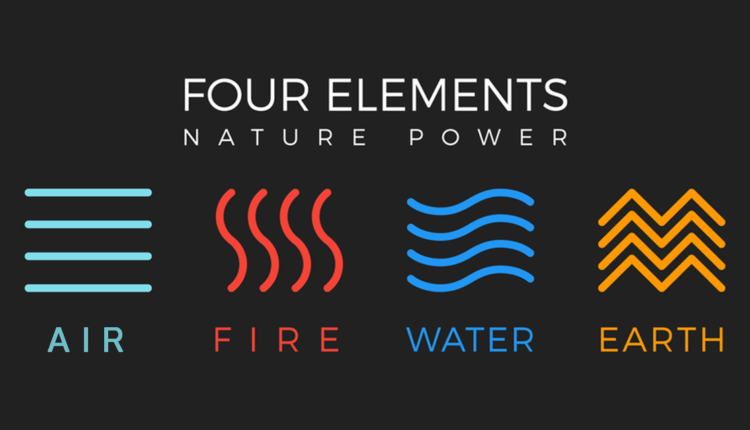 According to Western conception, there are four attributes including Air, Earth, Fire, and Water that constitute the world and the universe. Sometimes, we have a fifth element, which can also be interpreted as a quintessence from the other four attributes, Eather. However, we only consider four main elements in this article.

According to Greek mythology, in the beginning, the god of chaos gave birth to children and the original attributes include Gaia (Earth), Uranus (Air – Sky), Pontus (Ocean – Water), Hemera (Light – Fire). There are no elements that are homogeneous, they all have a blend and mutually change.

The Greek philosopher Thales has declared that Water holds supreme power. Anaximenes, Heraclitus, and Goethe gave the right to Air while Anaxagoras gave the right to Fire. And no one could see that Earth was the first and most basic element. That still remains in alchemists when creating solid objects from basic materials, starting with main materials and ending with Philosopher’s Stone.

Later philosophers began to base on the end of the previous period, so they always tried to find an explanation for the solid objects by higher principles. No matter how basic it is, Earth is the mother of all material things, physical states, and is the one who shares the roots of etymology. Earth is dust, where we form and pass away, from the earth, everything is sprouted, flourished and born. Therefore, Earth is the source of matter, wealth, prosperity, and beauty. According to Western traditions, they attached the image of Earth to the goddesses Gaia and Demeter –  goddesses of luxuriant trees and rich material. And it obviously became a sign of the identity of the Earth, some ancient people have humanized the image of Earth with a feminine model when divided by the gender.

In addition, Earth implies the inevitable limitations of life and physical existence because life is germinated in a physical body, it is often despised by people who claim themselves at higher levels of consciousness. Body and material must be worked, conquered, planted in rows and built into solid structures. Aristotle and the Stoics followed him, who carried the astrological tradition, have charted the four elements vertically with the Earth below, then the Water, the Air, and the Fire on top, it implied as a value scale.

In ancient times in Western traditions, they viewed Earth (physical, physical limitations of the body) at the bottom, it was seen as a monster that created a burden and also a place to supply goods to people. Those who value it will be considered having low materialism and must be imprisoned.

Earth’s humility has been linked to Saturn, an old father of Time and the Lord of the Past and Memories. In all elements, only the Earth is tolerant and records the time in the rock and fossil layers.

In short, Earth is material, physical, and the birthplace of life that creates wealth, property and the human body from matter, it is also limited by matter or physics. Earth is truly the first and fundamental element but is considered to be lowly, ordinary and burdensome.

The Greek philosopher Thales of Miletus said that the Earth floats on the Water, and it all originates from Water. This view can be traced back to the tradition of Babylonian who put the gods of Apsu and Tiamat into the beginning of everything. In Eridu’s story, Marduk built a raft on the original Water and a hut on that raft, which became the Earth. In Babylon’s epic, Marduk created Heaven and Earth from the body of Tiamat. Psalm 136 said that God “stretches the Earth on the water”, while the Koran said that Water is the source of all life.

This image of the Earth emerging from the Water evokes the appearance of life from the sea, the baby Earth was born from the uterus of Water, the Jungian islands of the mind were born of the sea of unconsciousness. Heraclitus likens life to a river that we cannot enter twice; and Water is an element that easily evokes impermanence, change, flush, and instability. We can use verbs to capture its nature better than adjectives or nouns: flowing, increasing, merging, dissolving, and watering. It is sensitive even to the smallest movements. Water and its power can deceive the eyes and create confusion and mental disorders.

According to Lao Tzu, “it is best to be like Water” because Water does not argue and resolves the lowest points; the Water flows in the hollow, follows the path of the least resistance, easily flows into available space and makes yourself comfortable. Water can fulfill the role of the lowest element because it is as deep as itself: sea level is the key from which we measure all geographic elevations.

Although there are some Water gods who are male, water and moisture are mostly feminine. Water moves down like Earth. They share feminine signs, negatives, the Yin part or introversion. Just like Zodiac signs belong to the element of Water and their compatibility, Water is often meant as life and death.

Fire and Air, Tarot elements related to the sky and burning stars, they have been assigned to masculine manifestations. The differentiation of gender into superior and subordinate is derived from a value system that likes men above women, judgments show a higher desire than depth and extroversion than introversion. That has created major value on the elements of Fire and Air.

Most descriptions of Fire in astrology are movement, stress, heating, burning energy, passion, enthusiasm, and irritability. Fire is also light which is an entity often forgotten in the era of electric lights.

In addition to the heat and brightness, myths help distinguish other properties of Fire. They divided into Fire 1 of the sun and stars, gods in the sky, Fire that Prometheus stole and Fire of enlightenment. Fire from beneath the Earth that destroyed Hephaestus or Vulcan. Although Hephaestus crafted the products of the Olympian gods by his forge, he did not rank very well. The Fire of Mars seems more like this second type. Mars or Ares is the son of Hera and Zeus who is the Fire of desire, revenge, and war.

In the past, stoics put Fire at the top of the diagram of vertical elements. However, Fire has reduced from the Renaissance. Babylonians hold a similar belief. A corpse became cold because the soul turned into fire and the spark of life left it and returned to the stars. If Fire means creativity, perhaps the fire-stealing behavior of Prometheus suited his role as the creator of humanity from clay. Creating actions, men and women is also a creative force.

Fire easily corresponds to the concept of energy, such as the physical and mental impact of animals and humans.

The Air shows the height principle. According to astrology, Air looks down from above, in a way that is impartial and objective, contrary to the subjectivity of Fire or constantly entering the depths of the Water. Air can see truths by reason, clarity, and sharpness. Air allows a wide vision connecting with the role of Mercury and Uranus. It gives us a sense of freedom. The word “impartial” can mean good or bad. It may be impartial to the grief, but it is indifferent to the pain.

When Anaximenes, a Greek philosopher in the 6th century BC, declared that the Air was infinite and sacred, he regarded Air as “the breath of the world”. Air with Fire, depicting various masculine elements and the idea of soul and immortality.  In Greek, spirit means “pneuma” and soul means “psyche”; and in Latin, “Spiritus” and “anima”, all etymology means breath.

Pneuma is the word used for Holy souls that descend through the air on the wings of a dove. Similar to Sanskrit and Chinese, it means to force and enhance the vitality that goes into the body with the breath.

Prometheus, in fact, brought life into his people from dust. Artists sometimes describe the soul as a butterfly leaving the lips of a dying person.

Galen attributed the type of optimism or Air to the “boundary of simplicity lies on madness”. But then, Air is exalted into the highest quality. In the 12th century, William of Conches determined Air as the appropriate element for humans, and he distinguished humanity into monsters that only included Fire, Water, and Earth.

The interaction of 4 Tarot elements

1. Cards that have the same Tarot elements

When having the same suit/element, they are “very strong for both good and bad things, according to their nature”.

Such a pair of cards aim to stand out, emphasizing the represented cards (whether good or bad). Their energy is synthesized or synchronized with each other. They can merge with each other in action, however, they do not challenge us. There are a few obstacles from within but at the same time, less harmful or able to adjust.

2. Tarot cards that have the same attribute

When having the same Tarot elements (same suits), they are “very strong for both good and bad things, according to their nature”.

Such a pair of cards aim to stand out, emphasizing the represented cards (whether good or bad). Their energy is synthesized or synchronized with each other. They can merge with each other in action, however, they do not challenge us. There are a few obstacles from within but at the same time, less harmful or able to adjust.

3. Tarot elements that complement each other

When the Tarot elements and suits complement each other, they are “something that interacts well with each other”.

These cards are not quite comfortable standing close to each other. They target redundancy or restraint, disruption or collision. Wands and Pentacles Tarot cards can give us an intense feeling, an aspiration from the senses; Swords and Cups Tarot cards can be emotionally stubborn. Both of them need to control creative power through clear distinctions. Everything directs towards receiving, stabilizing, acquiring, safe, and attracting other things. They can also act on the basis of resources that complement each other’s defects and improve each other.

When cards have “opposing Tarot elements”, they will “weaken each other and nullify each other’s power, whether good or bad”.

These Tarot cards are not compatible and contrast, they represent contradictions of energies that can lead to a stalemate, containment, prohibition and restriction of those energy sources. These cards can disable each other, allowing a third element to operate more independently. At the worst time, elements overlap, and they create fear along with a bad feeling about a conflict. They expose weaknesses from the roots of others and overthrow the insecurity and uncertainty. You should consider defense mechanisms and distractions that they bring to each other and clearly identify the wrongs, the inadequacies, the fears that they cause.

On the other hand, each card can push the other card to act and provide the energy needed to achieve things that seem impossible. They force us to develop. Understanding is not possible but compassion and acceptance are. Each party must learn to trust and maintain their inner self as well as what happens outside. The adjustment of consciousness is necessary.

Finally, we must be ready to let go of situations that cannot be saved because it can block the energy which takes us anywhere.