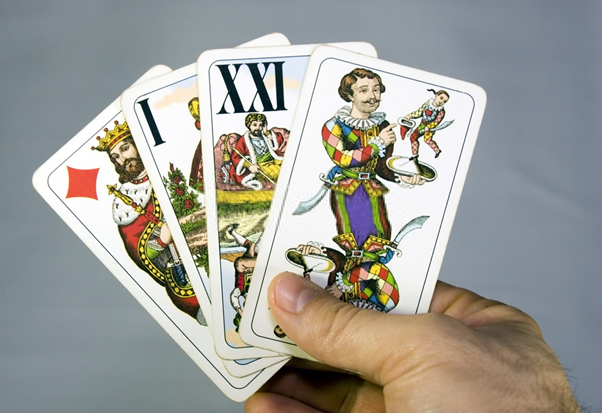 Interpreting the Court suit is considered by many to be the biggest challenge when learning how to read Tarot.

When Tarot Court cards are interpreted as human personalities

The illustrations on each suit show that different characters have the same “level” in similar arrangements and are related to suits. In fact, there are not many variations among these suits on the same level. This reinforces the argument that the Court suit represents people and personality more than situations and events. What we are looking at is people and how those levels and suits can distinguish different “personalities”, in other words, the dimensions of personality.

Tarot Court cards can describe an aspect of personality. The Court suit describes people who have statuses, tend to be leaders, and are representative samples.

Cards from Two to Ten indicate statuses and possibilities, and each one shows what is clearly happening. We can understand that the grouping in Tarot is as follows:

1) Cards from Two to Ten represent states and possible situations (rather than personalities).

4) Major Arcana represents the spiritual energy of the prototype and is the foundation of life, thus, it sketches deeper issues and influences, as well as guiding the soul and giving life lessons.

In Tarot readings, if you decide that the Tarot Court cards always show personality, then that will be the meaning of those cards. However, if you expand the interpretation including situations and events, each time you get a Court card, you will have to decide what it represents. This may make Tarot spreads more difficult to read.

This article will give you a glimpse on how to identify Court cards in Tarot, with an emphasis on how they give us insight into the querent’s personality as it relates to the situation of Tarot spreads.

If a Page card appears in a reading, it will represent a child-like aspect, relatively not formed yet or a new personality that is gradually brought to light in the character of the querent (anyone familiar with the theory of Jung’s personality types can associate Page card with “inferior functions”). This is the traditional “student” quality of Page, which represents a youthful and fresh character without a firm foothold in the nature of that person. He/she can experience new qualities and experiment with different levels. Based on the position of the card and the surrounding cards, we can consider Page card to indicate primitive qualities that querent is beginning to receive or just learn to express and self-aware.

When a Page card appears, we need to ask: what are the new personalities that this person is learning to aware within them?

Knight is learning to overpower the element’s energy source in his suit through action, adventure, response to a procedure, a movement or a leader. He may become overwhelming with this new energy but still not really well-trained. Like Page, Knight points out that these personality functions are not yet fully formed, but he actually involves in expressing and working with values in the outside world.

He has raised these elements to a certain extent, but is still being evaluated and tested in life’s experiences; he does not have enough elemental energy like King or Queen. There will have many trials and errors are created, the movement and the struggle in terms of personality. Knight is riding horses and moving and therefore, he is the symbol of change and development; he will dynamically develop the elemental skills and properties in his suit.

When a Knight card is selected when reading a spread, we need to ask: what aspect this person is learning to control through his/her action?

Queen represents the internal manifestations and the receptivity of related suit and element. She was formed completely, but the energy was formed inside more than outside. Queen understands her elemental nature and energy in her body. She is her element’s ruler and is also the leader, even though her leadership is less prominent, less active and less direct than King’s. She tends to lead by example rather than dictating.

Her expressions in the suit are often cleverer and indirect, but still as valuable and powerful as the direct expressions of King. Queen represents an aspect of personality hidden behind what people show. When a Queen card appears, we mainly look at the internal characteristics of the personality. Sometimes, this means that it is part of a personality that includes more than what is shown.

When Queen appears, we need to ask: what is this person think deep inside? What is going on within them?

King represents power and expression in the outside world. King is absolutely the head of the apparatus, is the most powerful member, the key man, the highest external expression of the whole Tarot deck. King is the leader, not the obedient. King has always acted in the outside world, is a powerful person, has a public face and be the person with overall responsibility.

He is the leader, the spokesperson, the ruler, a man of action; he is ready and able to order everything. King is the highest masculine expression of the mentioned element and suit, and he pushes the elemental energy out to the world of external expression. This energy fits “dominant functions” according to Carl Jung’s theory.

When King appears, we need to ask: how does this person want to take responsibility and lead? Which aspect of personality is so proficient that it dominates external personalities?

In one spread, let’s assume you are a girl and you draw the first two Tarot Court cards: the Queen of Pentacles and then the Page of Swords.

Using the above method, the Queen of Pentacles points out that the querent knows she is a down-to-earth person, living and acting cautiously and consciously. Her way of life is slow and sure to win, and she tends to become very organized, easy to guess, careful and devoted. The keyword for her is understanding. She wants to understand the evidence before making conclusions for a certain matter. For things that happen right before her eyes, she often does not take responsibility, but she has a lot of power and can control the problem carefully.

She lacks wide vision and risk; she likes to get used to what has happened in the past, what has been tested, what is safe and predictable. She tries not to make a mountain out of a molehill. This is a woman who likes organized and routine work and wants to be comfortable and appreciate economic safety. Because the Queen card appears in the “Situation” position, this is closely related to the real world – the world of daily activities and the most basic needs in life such as food, accommodation, money, work, comfort, health, habits, and arrangement.

The Page of Swords is in the “Crossing” position (a challenge for the first card rather than an obstacle) saying that the change is approaching through the kingdom of the Queen of Pentacles. Page points out a new aspect of her being illuminated – the part that wants (or needs) to be connected with new ideas and thought to herself, and the Queen of Pentacles has been challenged to let the winds of change begin to blow.

The thing Page card is talking about is the first vibe of something that gives light to her way of thinking and working, not a storm blowing through and swept away everything in its path. While she is comfortable working in a predictable way, a new concept emerged. Her challenge is to nurture new ideas and ways of thinking. If the Fool is the result card in this spread, the querent should consider taking more risk and stepping out of the safe path to discover new and innovative options in this area of life.